If you’re looking for a bird-oriented holiday outing designed for kids, grandkids and adults, too, there’s a great option about an hour from Tucson.  The Rooster Cogburn Ostrich Ranch is a 600-acre tract on the south side of Picacho Peak that features a petting zoo, monster truck tours and the opportunity to feed 300-pound ostriches and 4-ounce Rainbow Lorikeets. By December, 2016, added attractions will include diving ducks and stingray feeding.  In 1993, founder D.C. ‘Rooster’ Cogburn moved his ostrich ranch from Oklahoma to its present site, hoping to turn ostrich farming into a major enterprise. ‘Rooster’ Cogburn is a descendent of the one-eyed lawman portrayed by John Wayne in the 1969 movie, ‘True Grit’ (and by Jeff Bridges in the 2010 remake.) The original goal of a large-scale commercial ranch was never realized, in part due to a hot-air balloon flyover in 2002 that panicked 1,600 ostriches, resulting in a chaotic bird stampede that destroyed ranch facilities and led to the death of 1,000 ostriches. 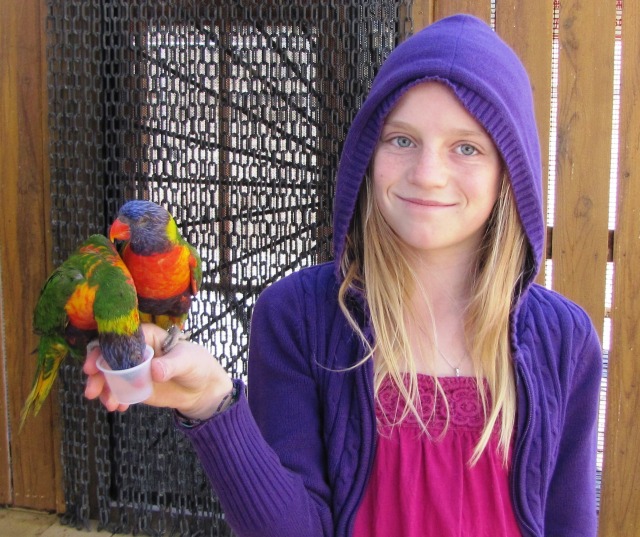 However, the switch in focus to family-friendly entertainment has been a big success, and this 5-star Trip Advisor attraction is well worth the drive.  Hundreds of ‘South African Black’ Ostriches are available for viewing, feeding and photographing, visitors can feed deer, miniature Sicilian donkeys, Boer goats, lorikeets and parakeets. ‘Monster truck’ tours provide a 40-minute open-air ride around the ranch on weekends, and a gift shop sells a variety of ostrich-related products, including (in season) fresh eggs that weigh 4 pounds and equal 2 dozen chicken eggs.

If you’re under 6 or over 106, admission is free, something to look forward to if you’re retired. Otherwise, 7 bucks will get you into the feeding areas, and admission includes food pellets for ostriches and a nectar cup for lorikeets. Rainbow Lorikeets are noisy parrots as colorful as their name, native to Australia and eastern Indonesia and, at nearly a foot in length, a three-ring circus when you’re holding a nectar cup. Make sure someone in your party carries a camera instead of nectar. 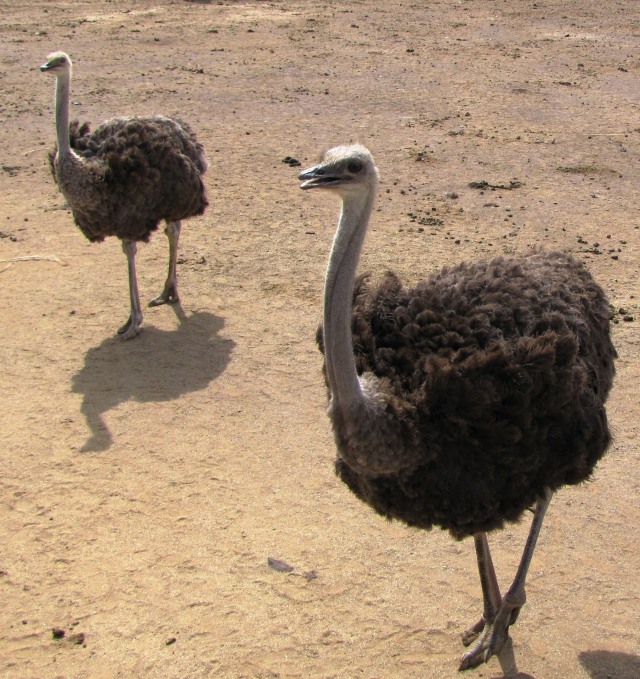 Feeding ostriches, on the other hand, is a whole different story. Ostriches, native to Africa, are the world’s largest bird, standing up to 9 feet tall and weighing in at 300 pounds or more. They have muscular legs and can run 40 miles per hour, a useful trait for a bird that can’t fly and lives in lion country. In the wild, they hang out in hot, dry deserts, making them happy campers in our lion-free Sonoran Desert. 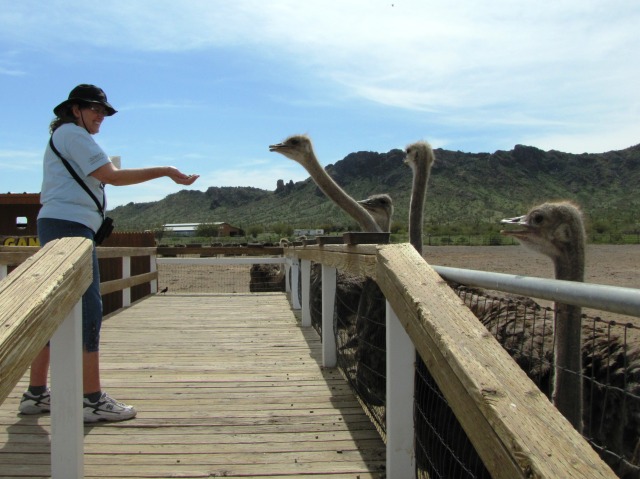 At Rooster Cogburn’s Ranch, fenced walkways and platforms provide visitors unobstructed close-up views of the ostriches, as well as easy access to feed the birds. The ostriches roam a large area, but know exactly where and when to find pellet-toting visitors. You have three choices for feeding them: placing pellets into an external chute safely screened from the big bird’s big beaks, placing the pellets into fence rail-top trays or, for the brave and foolhardy, extending an open hand full of pellets. The ostriches can easily swing their heads a couple of feet over the top of the fence, giving them ready access to guests’ hands and more. They may not have teeth, but they don’t have a smile, either, and an aggressively hungry largest-bird-in-the-world with a big open bill can be unnerving, to say the least. You might prefer the feeding options with less direct contact. Additionally, ostriches have been known to skip the pellets and go for an earring instead. Let’s just say that discretion is the better part of valor when it comes to feeding a 300-pound bird.

(This article was published in the December, 2016, issue of the Saddlebag Notes Newspaper, Tucson, Arizona)

A lifelong naturalist, Bob's avocation is birding, including field observation, study, photography and writing. He spent a career in computers and consulting, but his free time has been spent outdoors backpacking, fishing and enjoying nature firsthand. Bob has traveled extensively, exploring and photographing above and underwater in Indonesia, Malaysia, Thailand, Cambodia, Egypt and throughout the United States, Canada, Mexico, the Caribbean, Central and South America. Now retired, as an amateur ornithologist Bob studies, photographs and writes primarily about birds of the Western Hemisphere. Formerly the Feature Writer for Latin America and Caribbean Travel at Suite101.com, he has been Suite101's Feature Writer for Birds and Birding since January, 2010, and has received seven Editor's Choice awards, which are listed below. Bob also writes a monthly birding column for a newspaper in Arizona, and his work appears in the travel magazine, Another Day in Paradise, published in Zihuatanejo, Mexico. His blog, Birding the 'Brooke and Beyond, discusses birding, travel and other topics in Southeast Arizona and beyond. Bob is a member of the National and Tucson Audubon Societies, Western Field Ornithologists, Arizona Field Ornithologists, the American Birding Association and other birding and conservation organizations. Bob and his wife, Prudy, live in the Santa Catalina Mountain foothills near Tucson, Arizona. To date, Bob has received Suite101 Editor's Choice awards for the following articles: • Birding by Cruise Ship in the Caribbean • The Xantus' Hummingbird, Baja California's Only Endemic Hummer • Birding the White Mountains in and Around Greer, Arizona • The Greater Roadrunner, New Mexico's State Bird • Where to Find Steelhead on the Lower Deschutes River in Oregon • Birding La Bajada near San Blas, Mexico • The 2008 Christmas Bird Count at Estero del Yugo in Mazatlan
View all posts by Bob →
This entry was posted in Birding Arizona and tagged Ostrich Farm, Rainbow Lorikeet, Rooster Cogburn Ostrich Ranch. Bookmark the permalink.