Choosing the Right Binoculars for Birding 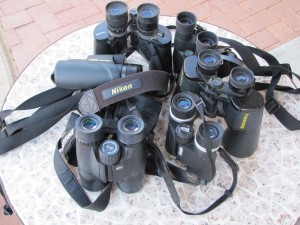 When I first realized how much I enjoyed birding, I knew I needed some new binoculars.  I owned a pair of Bushnell porro prism binoculars at the time.  Porro prisms are the ones that have a ‘z-shaped’ optical path, where the objective lenses are offset from the eyepieces.  These are the kind of binoculars favored by Navy admirals, or at least by the actors playing them, when they scan the sea for U-boats.  They usually have a lot of magnification and weigh almost as much as an anvil.  And they’re completely useless for birding.  So I knew I wanted the other kind, called roof prism binoculars, where the objective lenses are in line with the eyepieces, giving you a lighter-weight streamlined shape.  Unfortunately, I still thought I needed a lot of magnification, so I bought a pair of 12 X 50s.  The first number is the magnification, and the second number is the diameter (in millimeters) of the objective (front) lens.  The magnification number basically tells you how much closer an object appears than without magnification, so 12 X 50 binoculars ‘bring’ an object 12 times closer.  Another way to put this is that a 12 magnification will make an object 120 feet distant appear to be only 10 feet away.

The second number, objective lens diameter, relates to light-gathering capability.  The larger the number, the more light is gathered, and the more light that is gathered, the brighter the object becomes.  One would think, then, that you should look for the biggest numbers available, both in magnification and in objective lens size.  However, big numbers are not the whole story, and lots of magnification and big lenses have their shortcomings, especially when it comes to birding.

For one thing, bigger numbers generally mean bigger binoculars, and a 12 X 50 pair, as I quickly learned, weighed enough to take a lot of fun out of birding.  There are other disadvantages, too.  Higher magnification gives you a smaller field of view, something you definitely do not want when birding.  When your friend spots a rare warbler in a mesquite tree 40 feet away, you want to be able to ‘get on’ the bird quickly, before it flits away.  With larger magnification binoculars, your field of view is smaller, and you might still be trying to find the bird long after it has flown the coop.  The larger field of view you enjoy with smaller magnification binoculars also lets you see more birds in a flock, and allows you to follow a moving bird more easily.

Larger magnification binoculars also take more time to focus, are less capable of focusing on close objects and they exaggerate any unsteady hold.  When you’re birding, you want to be able to bring a bird into focus quickly.  Some birds cooperate by sitting in one place, but the most exciting ones always seem to think the grass (or tree) is greener somewhere else.  If you’re lucky, a rare bird might even fly onto a nearby perch, but most high magnification binoculars will not focus on close objects.  Ideally, your binoculars should be able to focus on objects as close as ten feet or less.

For most of us on Social Security, a steady hand is a distant memory.  For this group, even a 10X pair of binoculars will exaggerate an unsteady hold and keep you from getting a clear look at that special bird.  After I traded my 12X binoculars for a pair of 10X, I still wasn’t happy.  The 10X were smaller and lighter, but I continued to have trouble finding a bird that others could see, and when I did find him, even a slight hand movement would interfere with a clean look.

Binoculars come in many flavors, at a wide range of prices.  If you have one of those pair that Sterling Hayden used to spot German submarines, or if you are trying to find birds with a compact pair of opera glasses, it’s probably time to trade up.  The good news is that it’s not necessary to buy the most expensive binoculars around.  There are some beauties at $2,000, but you can find excellent high-performance binoculars for $300 or less.  Generally speaking, if you are serious about birding, you should avoid binoculars under $100, since these are less likely to have good optics.  At the same time, there seems to be little advantage in the range above $350 until you get at least to $1,000.  In my opinion, you will be happiest with a 7X or 8X pair of binoculars, and more than one good pair are available in these sizes at $200-350.

One of my favorites is the Nikon Monarch ATB 8 X 42.  These binoculars are waterproof, provide an excellent field of view (about 300 feet at 1,000 yards) and will focus on objects as close as 8 feet.  The nature shop at Tucson Audubon will match online reseller prices such as Amazon (currently $259) for members, and they waive the sales tax.  This is just one of many reasons to consider joining Tucson Audubon.  In addition, these binoculars come with an incredible 25 year ‘no fault’ warranty.  Probably more than I need, but I’ve always been an optimist.

(Note:  The above article and photographs are copyrighted by Bob Bowers.  The original article was written on December 29, 2011, and published in the February, 2012, issue of the Saddlebag Notes Newspaper, SaddleBrooke, Arizona.)

A lifelong naturalist, Bob's avocation is birding, including field observation, study, photography and writing. He spent a career in computers and consulting, but his free time has been spent outdoors backpacking, fishing and enjoying nature firsthand. Bob has traveled extensively, exploring and photographing above and underwater in Indonesia, Malaysia, Thailand, Cambodia, Egypt and throughout the United States, Canada, Mexico, the Caribbean, Central and South America. Now retired, as an amateur ornithologist Bob studies, photographs and writes primarily about birds of the Western Hemisphere. Formerly the Feature Writer for Latin America and Caribbean Travel at Suite101.com, he has been Suite101's Feature Writer for Birds and Birding since January, 2010, and has received seven Editor's Choice awards, which are listed below. Bob also writes a monthly birding column for a newspaper in Arizona, and his work appears in the travel magazine, Another Day in Paradise, published in Zihuatanejo, Mexico. His blog, Birding the 'Brooke and Beyond, discusses birding, travel and other topics in Southeast Arizona and beyond. Bob is a member of the National and Tucson Audubon Societies, Western Field Ornithologists, Arizona Field Ornithologists, the American Birding Association and other birding and conservation organizations. Bob and his wife, Prudy, live in the Santa Catalina Mountain foothills near Tucson, Arizona. To date, Bob has received Suite101 Editor's Choice awards for the following articles: • Birding by Cruise Ship in the Caribbean • The Xantus' Hummingbird, Baja California's Only Endemic Hummer • Birding the White Mountains in and Around Greer, Arizona • The Greater Roadrunner, New Mexico's State Bird • Where to Find Steelhead on the Lower Deschutes River in Oregon • Birding La Bajada near San Blas, Mexico • The 2008 Christmas Bird Count at Estero del Yugo in Mazatlan
View all posts by Bob →
This entry was posted in Uncategorized. Bookmark the permalink.