The Sapsucker, a Hummingbird’s Best Friend? 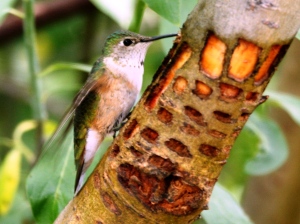 If you think ‘woodpecker’ is a funny name for a bird, how would you like to be called a ‘sapsucker’?  Like Rodney Dangerfield, the Picidae family just gets no respect.  There are 22 members of this family in North America, and 4 of these are sapsuckers.  The two you’ll find in Summit County are the Williamson’s and the Red-naped, both of which nest here in the summer, and our hummingbirds are grateful for both of them.

To be accurate, sapsuckers should be called ‘saplickers’ or ‘saplappers’.  They can’t actually suck sap, but they do lap and lick, using their long, sticky, barbed and extensible tongue.  Other woodpeckers have a similar tongue, but they use it to retrieve insects from holes and crevices rather than to lap sap.  Trees transport nutrients from their leaves to their roots using bark tissue called phloem, and the phloem sap that moves through this vascular system is prized by sapsuckers.  Actually, lots of animals, including bats and other birds, like this sap, but if it weren’t for sapsuckers, they would not be able to access it, because exposed sap quickly congeals.  To the benefit of all of these sap cravers, sapsuckers have an anticoagulant in their saliva that prevents coagulation. 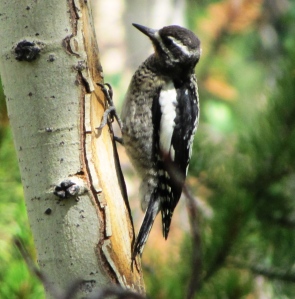 To get to the phloem sap, sapsuckers drill small, shallow holes in the tree’s bark.  These holes are square and in neat rows, looking more man-made than natural, and are an unmistakable sign of sapsuckers.  You will find them in all kinds of trees and shrubs, including aspen and willow.  For birders, searching for these sap wells is a great way to find hummingbirds in the wild.

How do Hummingbirds Benefit from Sapsucker Wells?

Fortuitously, phloem sap is nearly identical in sugar content to flower nectar, providing hummingbirds with a suitable alternative.  This is especially important to hummingbirds like our Broad-tailed, which often arrive on their mountain nesting grounds before many flowers are blooming.  Nectar represents as much as 90 percent of a hummingbird’s diet, but they also need protein.  The second important part of a hummingbird’s diet is insects, and these protein-rich bugs are also found at sapsucker wells, being drawn there by their own affinity for sweet sap.  In summer, these same wells attract migrating Rufous and Calliope Hummingbirds, passing through Summit County on their way south, back to their wintering grounds in Mexico.  Interestingly, this same pattern is repeated throughout the sapsucker’s range.  For example, the Red-naped Sapsuckers that nest in Colorado in the summer move to southeastern Arizona for the winter.  There, they drill sap wells in mesquite trees, drawing Anna’s and Costa’s Hummingbirds to the insect-laden, nutritious sap. 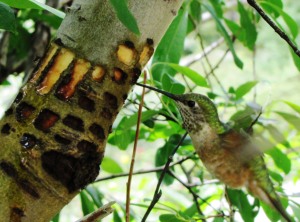 Hummingbirds continue to expand their summer ranges northward, underscoring the importance of providing artificial feeders to supplement natural nectar sources.  To make your own food, boil one cup of granulated sugar in four cups of water and let cool.  Don’t add food coloring, but clean feeders weekly.  Weather can drastically impact the availability of both insects and flower nectar, and at these times hummingbird feeders can save birds from starving or freezing to death.  For this reason, you should put feeders out early in spring before sighting any hummingbirds, and leave them up at least a week or two after your last fall sighting.

In a way, sapsuckers are nature’s own insurance policy for hummingbirds, allowing them to push further north without total risk.  Call them sapsuckers, saplickers, saplappers or even Rodney Dangerfields.  Respected or not, they’re still a hummingbird’s best friend.

A lifelong naturalist, Bob's avocation is birding, including field observation, study, photography and writing. He spent a career in computers and consulting, but his free time has been spent outdoors backpacking, fishing and enjoying nature firsthand. Bob has traveled extensively, exploring and photographing above and underwater in Indonesia, Malaysia, Thailand, Cambodia, Egypt and throughout the United States, Canada, Mexico, the Caribbean, Central and South America. Now retired, as an amateur ornithologist Bob studies, photographs and writes primarily about birds of the Western Hemisphere. Formerly the Feature Writer for Latin America and Caribbean Travel at Suite101.com, he has been Suite101's Feature Writer for Birds and Birding since January, 2010, and has received seven Editor's Choice awards, which are listed below. Bob also writes a monthly birding column for a newspaper in Arizona, and his work appears in the travel magazine, Another Day in Paradise, published in Zihuatanejo, Mexico. His blog, Birding the 'Brooke and Beyond, discusses birding, travel and other topics in Southeast Arizona and beyond. Bob is a member of the National and Tucson Audubon Societies, Western Field Ornithologists, Arizona Field Ornithologists, the American Birding Association and other birding and conservation organizations. Bob and his wife, Prudy, live in the Santa Catalina Mountain foothills near Tucson, Arizona. To date, Bob has received Suite101 Editor's Choice awards for the following articles: • Birding by Cruise Ship in the Caribbean • The Xantus' Hummingbird, Baja California's Only Endemic Hummer • Birding the White Mountains in and Around Greer, Arizona • The Greater Roadrunner, New Mexico's State Bird • Where to Find Steelhead on the Lower Deschutes River in Oregon • Birding La Bajada near San Blas, Mexico • The 2008 Christmas Bird Count at Estero del Yugo in Mazatlan
View all posts by Bob →
This entry was posted in Birding Colorado, Hummingbirds and tagged phloem sap, Red-naped Sapsucker, sapsucker wells. Bookmark the permalink.

1 Response to The Sapsucker, a Hummingbird’s Best Friend?