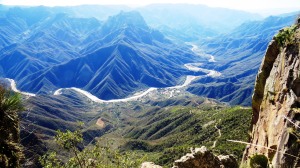 One of the joys of birding is that it takes you to lots of beautiful places.  I used to fish a lot, and when I got skunked on Oregon’s Deschutes River, the majesty of that wide river cascading over lava sheets made up for a fishless day.  Similarly, birding isn’t always outstanding, but the scenery can compensate.  Sometimes, the scenery overpowers the birding altogether, and Mexico’s Copper Canyon is a perfect example.  We just returned from our first trip there, and it far exceeded our expectations. 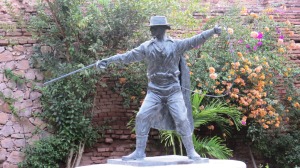 This Disneyland E-ticket adventure begins just 580 miles from SaddleBrooke, in the colonial town of El Fuerte, on the Fuerte River in Sinaloa.  We stayed at the Posada del Hidalgo, a garden hotel with bougainvillea and swarming Broad-billed Hummingbirds.  The hotel claims to be the birthplace of Don Diego de la Vega, better known as Zorro, and a sculpted masked man centers the atrium, bullwhip swirling and saber thrusting.  A costumed proxy entertains the happy hour crowd, but he isn’t Antonio Banderas. 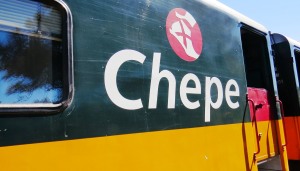 After breakfast, you board Chepe, the daily train that runs between Los Mochis on the Sea of Cortez and Chihuahua, 406 miles to the east, crossing the heart of the Copper Canyon along the way.    Each passenger car has comfortable seating for 64, with large, clean windows, and a dining car provides booths for 24, with even larger windows.  This Mexican train suggests Butch Cassidy and the Sundance Kid, but armed guards ride along to discourage budding modern day bandidos.  The guards spend most of the trip in the dining car, drinking coffee and eating doughnuts, which might (or might not) diminish passenger anxiety.  Seats are assigned as you board, and passengers are free to roam the cars, as well as hang out in the jostling, noisy space between cars.  No windows block your view here, but a waist-high door that sometimes unnervingly swings open is the only barrier between you and the ground that speeds by below.  No one polices the passengers, and no signs deter you from sticking your head, let along your hand, out the windowless area between cars, where tree branches and cut bank rocks often come within inches. 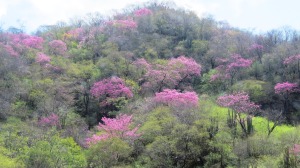 The train traverses tropical deciduous forest before entering the canyon, where it follows the Temoris River and climbs through towering rock walls and hillsides painted with pink blossoms of amapa trees.  It had rained the day before our trip, and the river was boiling down the canyon, while dozens of waterfalls cascaded down the walls.  After four hours (and just 75 miles) of this sensory overload, we disembarked at Bahuichivo, 5,250 feet above sea level and a 30-minute bus ride from the Mision Hotel in Cerocahui.  A welcoming lunch was followed by a tour of the delightful Tarahumara girls boarding school and a tasting of the local Cabernet Sauvignon.  Next morning, we spent the four hours before the next train arrived on a van trip to Cerro Gallego, a stunning, sweeping overlook of Urique, the deepest of the three copper canyons. 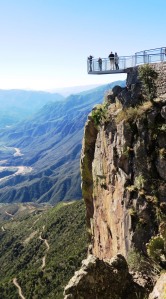 A Mexican version of Arizona’s Hualapai Indian Grand Canyon Skywalk invites the braver travelers to walk 20 feet out onto a glass and steel grate-floored projection that puts 6,100 feet of empty space between you and the canyon floor.  If your heart is still beating after this, you board the train for a short 27-mile, increasingly scenic ride to the next overnight stop at Posada Barrancas, 7,310 feet above sea level.  A couple of nice hotels here are perched on the canyon rim, and, like others we stayed at, they have hummingbird feeders.  The train continues east from here 183 miles to Chihuahua, but since most of the canyon was behind us, we returned the next day on the westbound train to El Fuerte, where we had left our car. 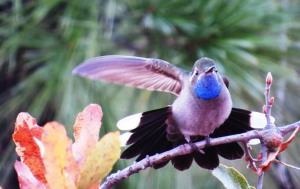 Before boarding the mid-day train, however, we took another 3-hour morning tour, this time to the canyon’s adventure park, featuring a 35 minute round trip cable car ride high above the chasm.  A zip line also crosses the gorge, and we took a video of a young couple from Puebla, Mexico, taking their first ever zip line ride on parallel cables.  It took them two and a half minutes to reach the end, at speeds up to 80 miles per hour and more than a thousand feet above the ground.  They looked older when they got back.  Oh, by the way, I forgot to mention we also saw a lot of great birds.

(This article originally appeared in the April, 2015 issue of the Saddlebag Notes newspaper, Tucson, Arizona.)

A lifelong naturalist, Bob's avocation is birding, including field observation, study, photography and writing. He spent a career in computers and consulting, but his free time has been spent outdoors backpacking, fishing and enjoying nature firsthand. Bob has traveled extensively, exploring and photographing above and underwater in Indonesia, Malaysia, Thailand, Cambodia, Egypt and throughout the United States, Canada, Mexico, the Caribbean, Central and South America. Now retired, as an amateur ornithologist Bob studies, photographs and writes primarily about birds of the Western Hemisphere. Formerly the Feature Writer for Latin America and Caribbean Travel at Suite101.com, he has been Suite101's Feature Writer for Birds and Birding since January, 2010, and has received seven Editor's Choice awards, which are listed below. Bob also writes a monthly birding column for a newspaper in Arizona, and his work appears in the travel magazine, Another Day in Paradise, published in Zihuatanejo, Mexico. His blog, Birding the 'Brooke and Beyond, discusses birding, travel and other topics in Southeast Arizona and beyond. Bob is a member of the National and Tucson Audubon Societies, Western Field Ornithologists, Arizona Field Ornithologists, the American Birding Association and other birding and conservation organizations. Bob and his wife, Prudy, live in the Santa Catalina Mountain foothills near Tucson, Arizona. To date, Bob has received Suite101 Editor's Choice awards for the following articles: • Birding by Cruise Ship in the Caribbean • The Xantus' Hummingbird, Baja California's Only Endemic Hummer • Birding the White Mountains in and Around Greer, Arizona • The Greater Roadrunner, New Mexico's State Bird • Where to Find Steelhead on the Lower Deschutes River in Oregon • Birding La Bajada near San Blas, Mexico • The 2008 Christmas Bird Count at Estero del Yugo in Mazatlan
View all posts by Bob →
This entry was posted in Birding Mexico and tagged cerocahui, Cerro Gallego, Chepe, El Fuerte, Mexico's Copper Canyon, Tarahumara, Temoris river, urique. Bookmark the permalink.