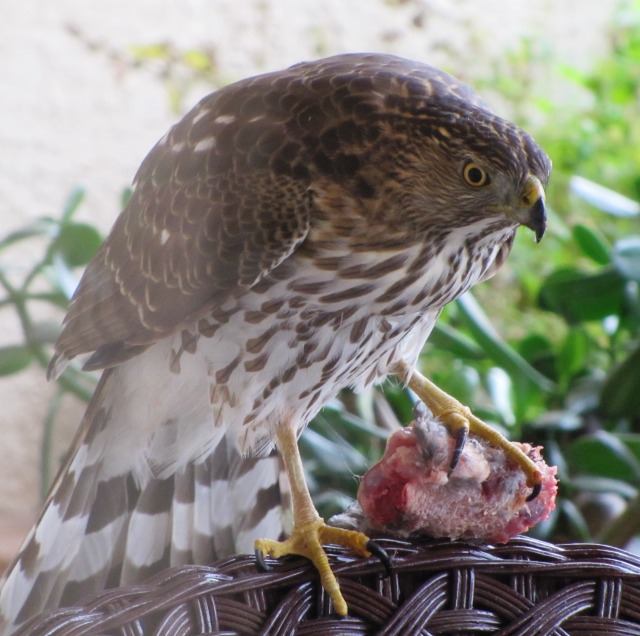 Wherever you find birds in the greater Tucson area, sooner or later you’ll find a Cooper’s Hawk, as well.  This is to be expected, since Cooper’s Hawks feed almost exclusively on other birds.  And, being resourceful, Cooper’s Hawks are commonly found in and around residential yards, especially those with bird feeders and quail blocks. These well-supplied yards rank high on Cooper’s Hawk TripAdvisor restaurant lists. If you’re like us and want to attract birds to your yard with seed feeders, understand that the quail and doves dining at your feeders are an entree themselves in the eyes of a Cooper’s Hawk.  And the next time a hawk is perched on your wall scanning the menu, take a good look at those eyes. 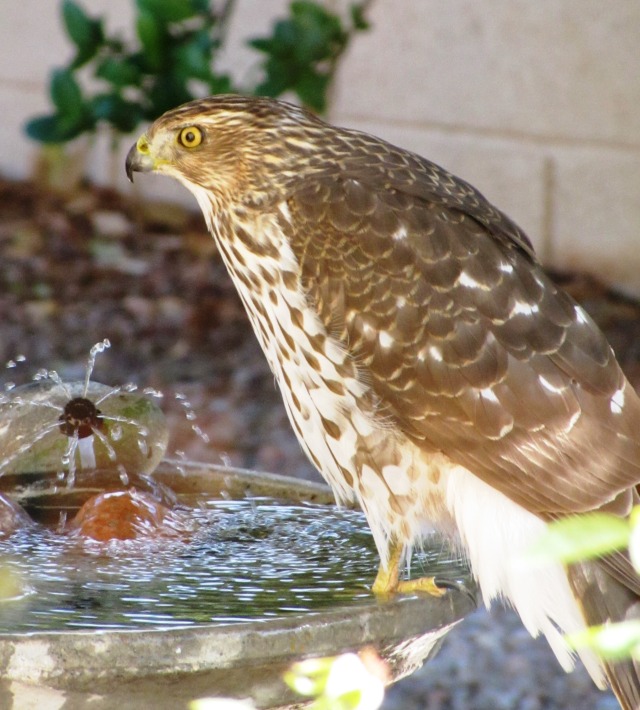 Those large yellow eyes and black pupils telegraph the bird’s appetite and mind set as clearly as those of a novice poker player. An unmistakable evil burns there that screams death and destruction, and any fat bird still lounging around nearby is already a day late and a dollar short. The Cooper’s is a killing machine so effective it’s probably been researched by the Pentagon. And if you think the oversized Cooper’s, with nearly 3 feet of wingspan, would be luckless pursuing a dove through tree branches and around corners, you’re mistaken. This is a bird’s worst nightmare, doing zero to sixty in milliseconds, capable of turning on a dime and probably parking parallel.  If your yard goes from 200 birds to none in a flash, look around for a Cooper’s and a deadly eye laser.

This brings us to the Cooper’s cousin, the Sharp-shinned Hawk. Both belong to the genus Accipiter, both feed on birds and they both look so much alike it’s difficult to tell one from the other. Around here, Cooper’s are far more common than Sharpies, who are more likely to be seen at these elevations in winter. Sharpies are smaller than Cooper’s, both in length and wingspan, though these differences often are hard to distinguish. One relatively good diagnostic tool is their menu. While Cooper’s have an appetite for quail and doves, Sharp-shinned Hawks seem to prefer lighter fare like sparrows and finches. Maybe they’re just watching their weight. Years ago, birding mentor Rick Wright suggested you could distinguish Cooper’s Hawks from Sharp-shinned easily, simply by looking in their eyes, and I’ve been a believer ever since. That determined killer look so obvious in the eyes of a Cooper’s Hawk, is nowhere to be seen in the Sharpie’s eyes. To the contrary, and in spite of his identical intent, the Sharp-shinned Hawk looks docile and friendly, a buddy to share a beer with.

The Sharpie seems innocently sweet and innocuous with a quizzical ‘who, me?’ in his eye, and to underscore this casual friendliness you’ll find him perched in the open like a Walmart greeter. Of course, he’s motionless and frozen to his spot (sometimes on the ground next to a feeder), but he doesn’t look mean. I don’t think anyone has researched this, and I don’t know if one look is more successful than the other. I do know that my yard is just as empty of entrée birds when either an evil-eyed Cooper’s or an innocent-eyed Sharpie is hanging out. Birds seem fully capable of understanding what’s behind those eyes regardless. Too bad we can’t do the same with politicians.

The above article was originally published in the Saddlebag Notes Newspaper, January, 2016.

A lifelong naturalist, Bob's avocation is birding, including field observation, study, photography and writing. He spent a career in computers and consulting, but his free time has been spent outdoors backpacking, fishing and enjoying nature firsthand. Bob has traveled extensively, exploring and photographing above and underwater in Indonesia, Malaysia, Thailand, Cambodia, Egypt and throughout the United States, Canada, Mexico, the Caribbean, Central and South America. Now retired, as an amateur ornithologist Bob studies, photographs and writes primarily about birds of the Western Hemisphere. Formerly the Feature Writer for Latin America and Caribbean Travel at Suite101.com, he has been Suite101's Feature Writer for Birds and Birding since January, 2010, and has received seven Editor's Choice awards, which are listed below. Bob also writes a monthly birding column for a newspaper in Arizona, and his work appears in the travel magazine, Another Day in Paradise, published in Zihuatanejo, Mexico. His blog, Birding the 'Brooke and Beyond, discusses birding, travel and other topics in Southeast Arizona and beyond. Bob is a member of the National and Tucson Audubon Societies, Western Field Ornithologists, Arizona Field Ornithologists, the American Birding Association and other birding and conservation organizations. Bob and his wife, Prudy, live in the Santa Catalina Mountain foothills near Tucson, Arizona. To date, Bob has received Suite101 Editor's Choice awards for the following articles: • Birding by Cruise Ship in the Caribbean • The Xantus' Hummingbird, Baja California's Only Endemic Hummer • Birding the White Mountains in and Around Greer, Arizona • The Greater Roadrunner, New Mexico's State Bird • Where to Find Steelhead on the Lower Deschutes River in Oregon • Birding La Bajada near San Blas, Mexico • The 2008 Christmas Bird Count at Estero del Yugo in Mazatlan
View all posts by Bob →
This entry was posted in Birding Arizona and tagged accipiter, Cooper's Hawk, Rick Wright, Sharp-shinned hawk. Bookmark the permalink.