Water Birds in the Desert 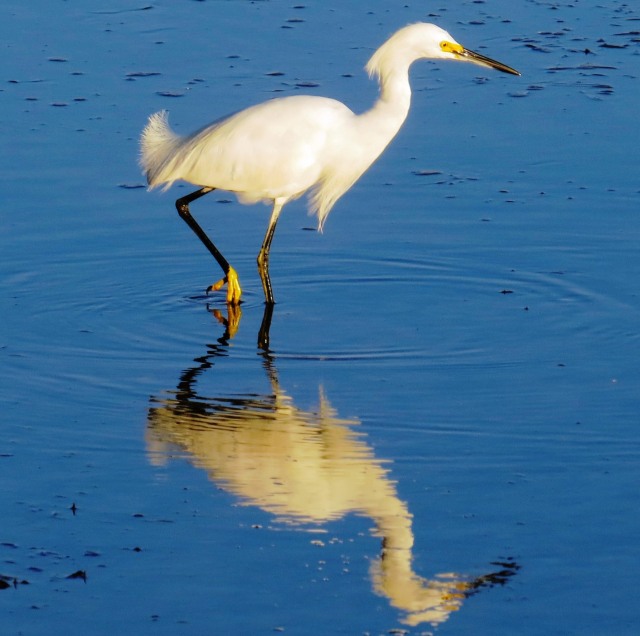 Snowy Egret, smaller than the Great, but just as stunning (photo Bob and Prudy Bowers)

As anyone who has seen the movie ‘The Big Year’ knows, unusual weather can lead to unusual birding, and on April 10 we had both.  An abnormal monsoon-like storm front swept into the Tucson area from the southwest, and it swept in a couple of unusual birds with it. As the afternoon storm pushed in, we took some Oregon friends to SaddleBrooke Ranch to see if there were any notable water birds on the large golf course pond.  We found Mallards as expected and Wilson’s Phalaropes, not expected, but commonly found on Arizona ponds in spring and fall.  The big surprise, however, was a Heermann’s Gull, a very rare visitor to Arizona.  Heermann’s Gulls live year-round in Baja and the Sea of Cortez, as well as seasonally along the U.S. west coast. Nowhere else in the U.S. except rare visits to the southern edge of the southwest deserts, and likely only after unplanned rides in a storm system.  In Pinal County, this is just the fifth  sighting ever, and the only one in spring.  The second storm-related sighting was a Caspian Tern that mysteriously appeared at Sam Lena Park pond in Tucson.  Caspian Terns are also common in Baja and the Sea of Cortez, and can often be found on sandbars near Heermann’s Gulls.  Maybe these two birds decided to hop a storm front together and take a spring break.

A rare visitor to SaddleBrooke in April, this Heermann’s Gull is at home in the Sea of Cortez (photo Bob and Prudy Bowers)

Although these examples are rare desert finds, water birds in general are anything but unusual in the Sonoran Desert.  Just like your ‘snowbird’ neighbors, water birds are common desert visitors, especially in the winter.  Between SaddleBrooke and SaddleBrooke Ranch we’ve documented more than 30 water birds to date.  By comparison, popular birding hotspot Sweetwater Wetlands in Tucson has recorded 87 water bird species, but with more than 8,000 documented birding checklists and daily visits by multiple birding enthusiasts, they easily outgun the few of us who scan the SaddleBrooke ponds.  In spite of this advantage, however, it’s been six years since a Heermann’s Gull visited Sweetwater.  Among the SaddleBrooke water-based birds, we’ve recorded ducks, egrets, avocets, herons, kingfishers, wigeons, teals and osprey, as well as a Greater White-fronted Goose and a Brown Pelican.  Not to mention the Heermann’s Gull.  Neotropic Cormorants, once considered rare in Arizona, have increased dramatically in recent years.  This April, relatively large numbers were seen on SaddleBrooke golf course ponds, flying in from some unknown southern base every morning to fish, and then heading back at sundown.

My own favorite water visitor was a group of 13 American Avocets who showed up on April 12, 2013, together with a lone Neotropic Cormorant.  Avocets are strikingly beautiful and elegant with long, thin upcurved bills.  They’re 18 inches in length and have a wingspan of nearly 3 feet, but only weigh 11 ounces.  The males and females are identical, and the rust-orange head and neck of a breeding-plumaged adult combined with a black and white body, bluish legs and upward sweeping bill is something even seniors don’t forget. Put 13 of these beauties together on the edge of a pond during an Arizona sunset, and you’d be hard pressed to find a better photo-op.  Unfortunately, these birds chose the restricted Mountainview golf course to pose for pictures, but since they broke the rules, we packed our camera in the golf cart and followed suit.  Sneaking under the Patrol’s radar isn’t recommended, but it’s cheaper than taking up golf.

The above article will be published in the Saddlebag Notes Newspaper, May 1, 2016.

A lifelong naturalist, Bob's avocation is birding, including field observation, study, photography and writing. He spent a career in computers and consulting, but his free time has been spent outdoors backpacking, fishing and enjoying nature firsthand. Bob has traveled extensively, exploring and photographing above and underwater in Indonesia, Malaysia, Thailand, Cambodia, Egypt and throughout the United States, Canada, Mexico, the Caribbean, Central and South America. Now retired, as an amateur ornithologist Bob studies, photographs and writes primarily about birds of the Western Hemisphere. Formerly the Feature Writer for Latin America and Caribbean Travel at Suite101.com, he has been Suite101's Feature Writer for Birds and Birding since January, 2010, and has received seven Editor's Choice awards, which are listed below. Bob also writes a monthly birding column for a newspaper in Arizona, and his work appears in the travel magazine, Another Day in Paradise, published in Zihuatanejo, Mexico. His blog, Birding the 'Brooke and Beyond, discusses birding, travel and other topics in Southeast Arizona and beyond. Bob is a member of the National and Tucson Audubon Societies, Western Field Ornithologists, Arizona Field Ornithologists, the American Birding Association and other birding and conservation organizations. Bob and his wife, Prudy, live in the Santa Catalina Mountain foothills near Tucson, Arizona. To date, Bob has received Suite101 Editor's Choice awards for the following articles: • Birding by Cruise Ship in the Caribbean • The Xantus' Hummingbird, Baja California's Only Endemic Hummer • Birding the White Mountains in and Around Greer, Arizona • The Greater Roadrunner, New Mexico's State Bird • Where to Find Steelhead on the Lower Deschutes River in Oregon • Birding La Bajada near San Blas, Mexico • The 2008 Christmas Bird Count at Estero del Yugo in Mazatlan
View all posts by Bob →
This entry was posted in Uncategorized. Bookmark the permalink.