Colombia is smaller than 25 other countries, and just two-thirds the size of Alaska, and yet it holds the world’s record for most species of birds. Nearly 2,000 species have been documented to date, or nearly 20 percent of the world’s total. Colombia’s count exceeds that of every other country in the world, including its bird-rich border-sharing neighbors Ecuador, Peru, Venezuela and Brazil, which incidentally is nearly eight times larger than Colombia. In spite of this, birders have been slow to explore Colombia’s avifauna, in large measure due to the country’s 52-year war with FARC, a conflict that has killed more than 220,000 people.  That conflict appeared to have ended when government and rebel leaders signed a peace accord in Havana last month. A public referendum endorsing the accord was held on October 2nd, and was expected to pass by a wide margin, but instead failed in a close vote. This may cast a shadow on Colombia’s future birding prospects, but there is reason to be hopeful, since both sides are tired of fighting and seem willing to continue seeking an acceptable solution. From a birding perspective, the doves are dominating the hawks.

Prudy and I took advantage of this stabilization in August, and traveled to Colombia for a month’s exploration of many of the country’s best birding destinations.  We flew into Bogota, spent two days with a local guide at four sites near the capitol and another two visiting cultural sites, then flew two hours north to spend 3 days birding on our own on San Andres, a ten square-mile, little-known island off the coast of Nicaragua. From there, we returned to Bogota, then flew to Cali, where we joined local guides Andrea and Alejandro. Recently wed, this young couple have started a birding and herping tour service, appropriately called ‘Birding and Herping’, and they had agreed to spend 10 days with us, following a birding itinerary we had put together to cover the three Andean cordillera between Cali and Medellin. We parted with Andrea (the ornithologist) and Alejandro (the herpetologist) at Medellin, from where we traveled on our own to Cartagena, and from Cartagena to Santa Marta, Minca and finally El Dorado, an eco-lodge in the Santa Marta Sierra before returning to Bogota and home. 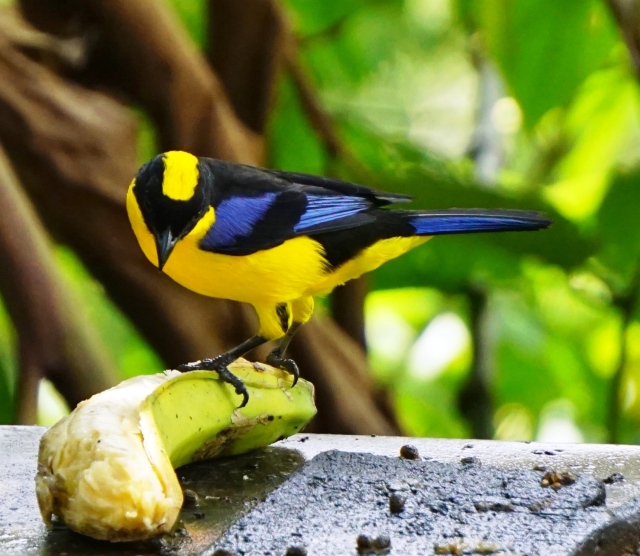 The primary cities of Colombia are large (Bogota is nearly nine million), traffic-bound centers of growth and hustle, but once outside these metropolitan areas, birders are faced with problems of access, transportation and some challenging roads. In spite of this, and by using local guides, we saw much of this spectacularly beautiful country and many wonderful birds. We recorded 345 species, almost all of which were birds we had not seen before, including 55 species of hummingbirds and 14 of Colombia’s 78 endemics. We also took more than 7,600 photographs. In addition to Colombia’s 56 National Natural Parks, many lodges, private homes and fincas share hummingbird and other feeders with visiting birders. One of our favorite sites was the Hotel Termales del Ruiz, nestled more than 10,000 feet high in the Andes’ Los Nevados, and featuring a volcanic-warmed thermal swimming pool. Each morning, you can hold miniature sugar water feeders while dozens of hummingbirds swarm around, perching on your head and hands for up close and personal observation.

This is an adventure we recommend without reservation, and guided trips are offered by several U.S. based companies. This is the easiest and most convenient option, although you can also arrange personalized guided trips in Colombia using the same guides that would accompany your states-originated trip at a fraction of the cost. Several U.S. airlines fly direct to Colombia, and with a flight time of just four hours from Atlanta to Bogota, fares are reasonable. Living this close to the country with more bird species than any other in the world is an opportunity that should not be skipped.

A lifelong naturalist, Bob's avocation is birding, including field observation, study, photography and writing. He spent a career in computers and consulting, but his free time has been spent outdoors backpacking, fishing and enjoying nature firsthand. Bob has traveled extensively, exploring and photographing above and underwater in Indonesia, Malaysia, Thailand, Cambodia, Egypt and throughout the United States, Canada, Mexico, the Caribbean, Central and South America. Now retired, as an amateur ornithologist Bob studies, photographs and writes primarily about birds of the Western Hemisphere. Formerly the Feature Writer for Latin America and Caribbean Travel at Suite101.com, he has been Suite101's Feature Writer for Birds and Birding since January, 2010, and has received seven Editor's Choice awards, which are listed below. Bob also writes a monthly birding column for a newspaper in Arizona, and his work appears in the travel magazine, Another Day in Paradise, published in Zihuatanejo, Mexico. His blog, Birding the 'Brooke and Beyond, discusses birding, travel and other topics in Southeast Arizona and beyond. Bob is a member of the National and Tucson Audubon Societies, Western Field Ornithologists, Arizona Field Ornithologists, the American Birding Association and other birding and conservation organizations. Bob and his wife, Prudy, live in the Santa Catalina Mountain foothills near Tucson, Arizona. To date, Bob has received Suite101 Editor's Choice awards for the following articles: • Birding by Cruise Ship in the Caribbean • The Xantus' Hummingbird, Baja California's Only Endemic Hummer • Birding the White Mountains in and Around Greer, Arizona • The Greater Roadrunner, New Mexico's State Bird • Where to Find Steelhead on the Lower Deschutes River in Oregon • Birding La Bajada near San Blas, Mexico • The 2008 Christmas Bird Count at Estero del Yugo in Mazatlan
View all posts by Bob →
This entry was posted in Birding Colombia and tagged Birding and Herping, Colombia endemic birds, Colombia hummingbirds, South America birds, Termales del Ruiz. Bookmark the permalink.