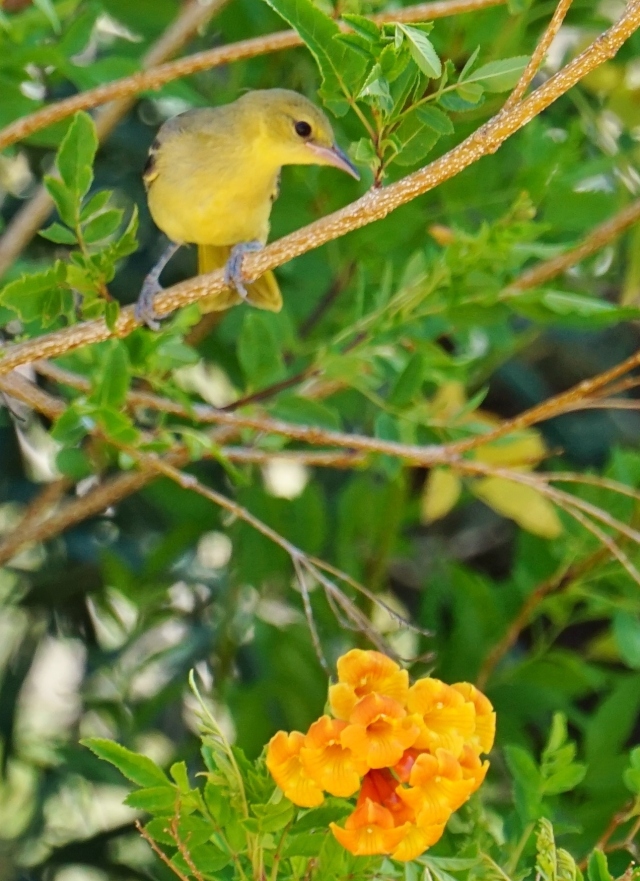 Due to a few simple twists of fate, we’ve been ‘stuck in Dodge’ this summer enjoying an unending string of phenomenal monsoons instead of our usual getaway to the foggy coast of Oregon.  However, this unplanned layover brought some unexpected surprises. Three weeks of rain turned the desert into Hawaii, cut our water bill in half, and our double digit highs (coupled with 1% humidity) were easy to take when Portland set a 130 year record of 105.  Another pleasant surprise was an abundance of summer birds. Broad-billed Hummingbirds, our most exotic local hummer, seem to be taking over Arizona. When we moved here fifteen years ago, they were no more than a summer treat, retreating to Mexico in the fall and not returning until spring, while now they’re a year-round SaddleBrooke resident as thick as bees. Even better, we’ve seen more Hooded Orioles this summer than ever, and the returning pair that nests in our neighbor’s palm tree had a record clutch of four this spring, two males and two females. Add regular visits from neighboring orioles, and these bright yellow, black and white birds are eye candy extraordinaire.

Where there’s smoke there’s fire, and where there’re Hooded Orioles, there’re Bronzed Cowbirds, adding red and black to the bird rainbow. Cowbirds throughout the world are consistent in their nesting behavior.  They don’t build their own nests, instead parasitizing other nests, watching and waiting until the rightful owners take a break, then swooping in to lay their own eggs in the host nest. Sometimes they nestle these in with the originals, but often they’ll destroy all other eggs, even when they find another cowbird’s. Heartless, yes, but all part of nature’s drive for self-preservation. Sometimes, the host birds abandon the intruded nest and build elsewhere, and sometimes they simply build over the contaminated nest. One observer watched a pair of Yellow Warblers build a 12-story layer of nests, adding a new level on top of eggs each time a cowbird encroached to add her own. Often though, the host birds simply feed and raise the strange-looking chicks as their own, perpetuating the cowbird line. 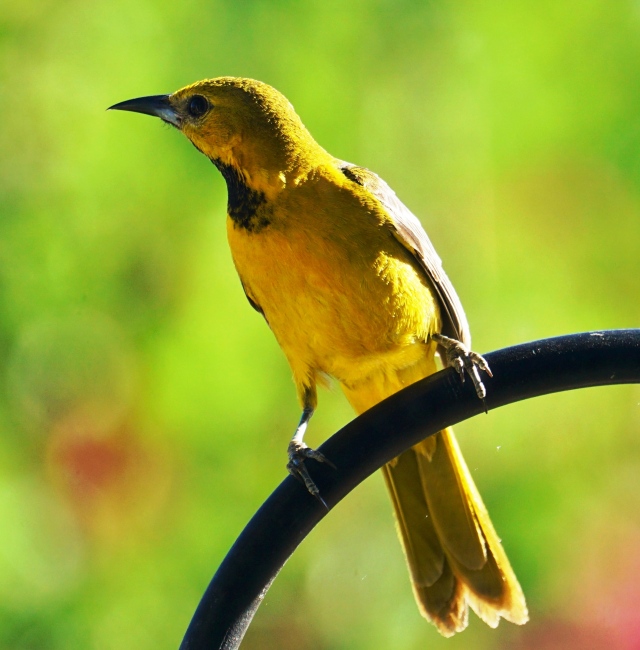 This summer we’ve seen lots of related action:  orioles driving off cowbirds, male cowbirds checking the palm for nests and female cowbirds flying into the tree, presumably to lay eggs.  Knowing exactly what these cowbirds are doing is as difficult as monitoring the orioles themselves during nest-building, since the nests are 30 feet or more above the ground and well hidden.  Hooded Orioles favor tall palms, attaching their nests to the underside of fronds. They peel off long frond fiber threads which they meticulously weave into beautiful hanging baskets. When researching Hooded Orioles’ nesting habits from the birding bible, Cornell University’s Birds of North America, we found almost nothing, due to limited studies and the difficulty in observing hidden nests high above the ground.

Two weeks ago, these obstacles were swept away. A female oriole began building a hanging nest just over our noses under the eaves of our patio, less than 9 feet up.  Encouraged by a first year male (who was often chased by and in battle with an adult male—his father?), this female (his sister or mother?) would zip in under the eaves carrying a 2-foot length of palm fiber. The double-framed eave masked the nest from our patio door, but could see the hanging thread dance, bounce and slowly disappear as the out-of-sight oriole took two minutes to weave each thread into her intricate basket. In spite of a six day building process, our attempts to photograph the process were unsuccessful. We set a camera to be triggered remotely, but the layout required being in front of the camera on the open patio, rather than hidden inside. Nevertheless, we made continued efforts to photograph the oriole on her nest, an impossibility had the nest been normally located high in a tree. In the short available window, our oriole wouldn’t cooperate, but then luck delivered a more rare opportunity. While we baked in the sun, a male Bronzed Cowbird walked across the patio, and flew up and under the eave. We crept close to the camera, triggered the remote and managed to capture him inspecting the nest for his parasitizing bride.

Later, the nest was abandoned by the oriole. Not unusual, but it left us curious as to what we had witnessed and why.  Maybe the nest was built as a decoy to keep cowbirds away from a real palm tree nest?  Maybe a young female was just practicing for next year, her version of basket weaving 101?  Who knows? It remains a mystery we would have missed had we driven north.

(This article was published in the September, 2017, issue of the Saddlebag Notes Newspaper, Tucson, Arizona)

A lifelong naturalist, Bob's avocation is birding, including field observation, study, photography and writing. He spent a career in computers and consulting, but his free time has been spent outdoors backpacking, fishing and enjoying nature firsthand. Bob has traveled extensively, exploring and photographing above and underwater in Indonesia, Malaysia, Thailand, Cambodia, Egypt and throughout the United States, Canada, Mexico, the Caribbean, Central and South America. Now retired, as an amateur ornithologist Bob studies, photographs and writes primarily about birds of the Western Hemisphere. Formerly the Feature Writer for Latin America and Caribbean Travel at Suite101.com, he has been Suite101's Feature Writer for Birds and Birding since January, 2010, and has received seven Editor's Choice awards, which are listed below. Bob also writes a monthly birding column for a newspaper in Arizona, and his work appears in the travel magazine, Another Day in Paradise, published in Zihuatanejo, Mexico. His blog, Birding the 'Brooke and Beyond, discusses birding, travel and other topics in Southeast Arizona and beyond. Bob is a member of the National and Tucson Audubon Societies, Western Field Ornithologists, Arizona Field Ornithologists, the American Birding Association and other birding and conservation organizations. Bob and his wife, Prudy, live in the Santa Catalina Mountain foothills near Tucson, Arizona. To date, Bob has received Suite101 Editor's Choice awards for the following articles: • Birding by Cruise Ship in the Caribbean • The Xantus' Hummingbird, Baja California's Only Endemic Hummer • Birding the White Mountains in and Around Greer, Arizona • The Greater Roadrunner, New Mexico's State Bird • Where to Find Steelhead on the Lower Deschutes River in Oregon • Birding La Bajada near San Blas, Mexico • The 2008 Christmas Bird Count at Estero del Yugo in Mazatlan
View all posts by Bob →
This entry was posted in Birding Arizona and tagged bronzed cowbird, cowbird parasitism, Hooded oriole nest building. Bookmark the permalink.