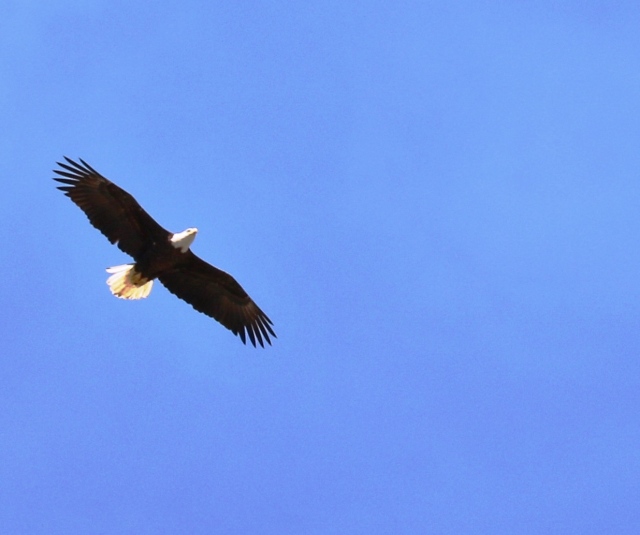 If you’re a serious birder, you don’t just pack your binoculars and camera for long trips to exotic places like Brazil or South Africa; you take advantage of every opportunity to see birds during even the shortest of getaways.  We recently traveled to Liberty, Missouri for a brief four-night visit in order to attend a college fraternity dinner. The three-day stay was heavily packed with visits with friends and family as well as the dinner, and we didn’t expect to fit any meaningful birding into such as short time, but we were pleasantly surprised.  Knowing our free time would be limited, we planned ahead (always a good idea) by searching eBird.org for birding ‘hotspots’ in or near our hotel in Liberty.  Liberty, Missouri, the county seat of Clay County, is better known for its bank robbers and jails than as a birding hotspot; after all, this is where the Mormon Prophet Joseph Smith was jailed for five months and where Jesse James pulled off the first daylight successful peacetime bank robbery in the U.S., on February 13, 1866, killing a college student in the process (not one of my fraternity brothers).  Nevertheless, there are dozens of eBird hotspots within a 15-mile radius of Liberty, which includes the major metropolitan center of Kansas City.

These hotspots range from parks and prairies to lakes and rivers, but our favorite was a relatively small 100-acre wildlife preserve, the Martha Lafite Thompson Nature Sanctuary located just a few minutes east of the Jesse James Bank Museum in downtown Liberty.  157 species have been reported on eBird since it opened, with a broad variety of birds ranging from water birds like Blue-winged Teals (Rush Creek meanders through the sanctuary grounds), forest dwellers like Blue Jay and Tufted Titmouse to Raptors like Red-shouldered Hawk and Bald Eagle.  In the few short visits we enjoyed at the park we found 40 species, with many unknown or at least uncommon to the Sonoran Desert we bird back in Arizona.  These included Red-bellied, Pileated and Downy Woodpeckers, White-throated Sparrow, Eastern Phoebe, American Goldfinch, Brown Thrasher and one new life bird, the Swamp Sparrow.

The Sanctuary is well staffed with a pleasant and very helpful crew of knowledgeable naturalists, overseen by the resident Executive Director Michael Sandy, who somehow fit meaningful time into a crowded schedule to guide us around the nature center and grounds.  The Nature Center, which provides classrooms, a gift shop, nature library and a feeder-viewing deck, attracts more than 10,000 kids each year from schools, scouts, churches and 4-H groups to learn more about local wildlife preservation.  We managed to squeeze in birding at three or four other eBird hotspots, including Smithville Lake and a park along the banks of the Missouri River, but none of these sites was more satisfying than Martha Lafite Thompson.  My only regret was the decision to leave my heavier telephoto lens behind, a mistake I won’t make again. 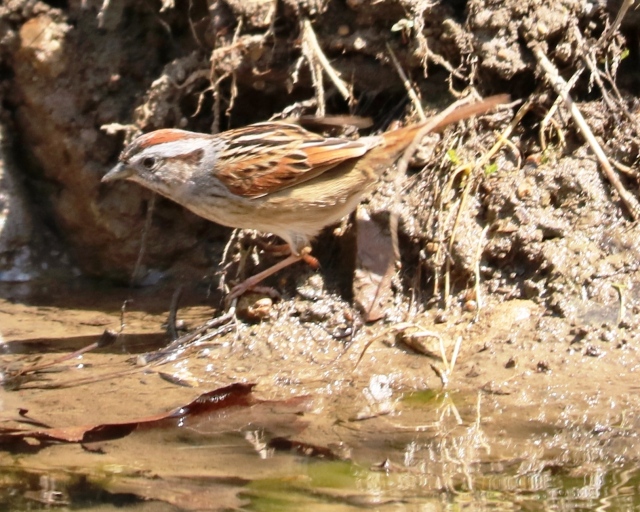 If you’re a birder, the next time you plan a short vacation to someplace different don’t forget to take some time to research nearby birding hotspots. And don’t forget your binoculars and good camera.  You won’t regret it, and you might even learn something about notorious bank robbers.

(This article will be published in the June 2018 Saddlebag Notes Newspaper, Tucson, Arizona)

A lifelong naturalist, Bob's avocation is birding, including field observation, study, photography and writing. He spent a career in computers and consulting, but his free time has been spent outdoors backpacking, fishing and enjoying nature firsthand. Bob has traveled extensively, exploring and photographing above and underwater in Indonesia, Malaysia, Thailand, Cambodia, Egypt and throughout the United States, Canada, Mexico, the Caribbean, Central and South America. Now retired, as an amateur ornithologist Bob studies, photographs and writes primarily about birds of the Western Hemisphere. Formerly the Feature Writer for Latin America and Caribbean Travel at Suite101.com, he has been Suite101's Feature Writer for Birds and Birding since January, 2010, and has received seven Editor's Choice awards, which are listed below. Bob also writes a monthly birding column for a newspaper in Arizona, and his work appears in the travel magazine, Another Day in Paradise, published in Zihuatanejo, Mexico. His blog, Birding the 'Brooke and Beyond, discusses birding, travel and other topics in Southeast Arizona and beyond. Bob is a member of the National and Tucson Audubon Societies, Western Field Ornithologists, Arizona Field Ornithologists, the American Birding Association and other birding and conservation organizations. Bob and his wife, Prudy, live in the Santa Catalina Mountain foothills near Tucson, Arizona. To date, Bob has received Suite101 Editor's Choice awards for the following articles: • Birding by Cruise Ship in the Caribbean • The Xantus' Hummingbird, Baja California's Only Endemic Hummer • Birding the White Mountains in and Around Greer, Arizona • The Greater Roadrunner, New Mexico's State Bird • Where to Find Steelhead on the Lower Deschutes River in Oregon • Birding La Bajada near San Blas, Mexico • The 2008 Christmas Bird Count at Estero del Yugo in Mazatlan
View all posts by Bob →
This entry was posted in Birding Missouri and tagged Birding Missouri, clay county missouri, downy woodpecker, Martha Lafite Thompson Nature Sanctuary, swamp sparrow, vacation birding. Bookmark the permalink.