Caring for our Birds in Winter 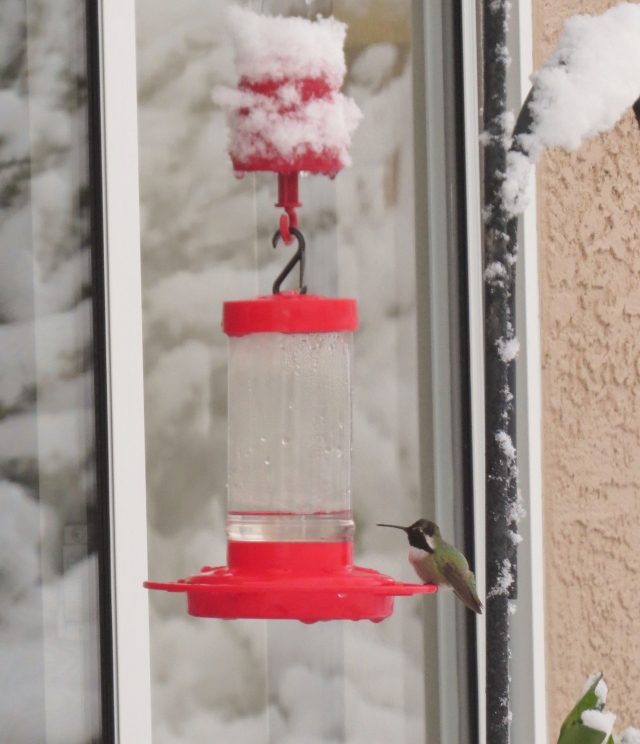 Not that long ago it was thought that putting hummingbird feeders out in the winter would encourage birds to hang around past the time they might normally migrate south.  This concern has been proven false for quite some time, but unfortunately some folks still think a feeder will cause a bird to forget to migrate, which can have serious consequences, especially in southern states like Arizona where hummingbirds are resident year round. Here in SaddleBrooke, some of our migrating hummingbirds leave late for Mexico or arrive abnormally early in the spring, and three of our species spend every winter here:  our Costa’s, the male with a purple gorget, Anna’s Hummingbirds (the male’s gorget is ruby red) and the brilliantly blue-green iridescent Broad-billed Hummingbird. These birds don’t wait for spring to nest, and sugar water feeders can make a life or death difference when temperatures plunge.

Even in some of the coldest winter states, such as Wisconsin, late or lost migrant hummingbirds have been documented in the middle of winter, but with three year-round species of hummingbirds in SaddleBrooke, we clearly need to keep our hummingbird feeders cleaned and filled regularly.  Winter in the Sonoran Desert can sometimes be brutal, as it was in February of 2011, when our thermometer dropped to 17 degrees.  When temperatures drop below freezing or if our plants and feeders are buried under an atypical snowfall, all our birds are at risk.

Without a thawed and clear feeder, Hummers can die  (Photo Bob and Prudy Bowers)

Although hummingbirds rely on insects and spiders for protein, up to 90% of their diet consists of flower nectar or the artificial equivalent, sugar water.  Considering that these lightweight wonders (our Costa’s Hummingbirds weigh about two and one-half grams, the same as a penny) routinely beat their wings 70 times per second, it’s little wonder they thrive on high energy sugar fuel.  When freezing weather hits or snow covers flowers and feeders, hummingbirds are particularly vulnerable.  They put themselves into a dormant, low metabolic state during freezing nights, slowly absorbing sugar stored in their crop, but if replacement sugar is not available in the morning, these birds might die.  If an overnight freeze is predicted, bring your feeders in after dark and replace them at first light.  If daytime temperatures persist below freezing, keep a close eye on your feeders, and thaw them out if ice crystals form.  Feeders without metal parts are especially useful, since they can be thawed quickly in a microwave.

Although hummingbirds are most vulnerable, severe weather impacts all birds.  Sunflower and thistle feeders should be kept clean and full throughout the winter, as well, and winter is a great time to hang suet, which provides high calorie fat.  Suet cages are inexpensive, and suet cakes are cheap as well. If you want to provide a special treat, make your own suet.  Email us for an easy suet recipe, and watch your birds wolf it down in a fraction of the time they spend on commercial cakes. We make suet with lard, bacon drippings and a wide variety of other ingredients including peanut butter, cornmeal, flour, oatmeal, seeds, berries, cereal and nuts.  This is a great way to dispose of nuts, cereal and other foodstuffs that have outlived their shelf life. Another ingredient that your birds will thank you for is freeze-dried mealworms, which can be purchased at Tractor Supply or online at Amazon.  As much as birds appreciate mealworms, you might find it a little difficult to stir them into a simmering suet mixture on your stove.  At the very least you will probably want to dedicate the pot exclusively to suet.

This article was first published in the January, 2019 issue of Saddlebag Notes Newspaper, Tucson

A lifelong naturalist, Bob's avocation is birding, including field observation, study, photography and writing. He spent a career in computers and consulting, but his free time has been spent outdoors backpacking, fishing and enjoying nature firsthand. Bob has traveled extensively, exploring and photographing above and underwater in Indonesia, Malaysia, Thailand, Cambodia, Egypt and throughout the United States, Canada, Mexico, the Caribbean, Central and South America. Now retired, as an amateur ornithologist Bob studies, photographs and writes primarily about birds of the Western Hemisphere. Formerly the Feature Writer for Latin America and Caribbean Travel at Suite101.com, he has been Suite101's Feature Writer for Birds and Birding since January, 2010, and has received seven Editor's Choice awards, which are listed below. Bob also writes a monthly birding column for a newspaper in Arizona, and his work appears in the travel magazine, Another Day in Paradise, published in Zihuatanejo, Mexico. His blog, Birding the 'Brooke and Beyond, discusses birding, travel and other topics in Southeast Arizona and beyond. Bob is a member of the National and Tucson Audubon Societies, Western Field Ornithologists, Arizona Field Ornithologists, the American Birding Association and other birding and conservation organizations. Bob and his wife, Prudy, live in the Santa Catalina Mountain foothills near Tucson, Arizona. To date, Bob has received Suite101 Editor's Choice awards for the following articles: • Birding by Cruise Ship in the Caribbean • The Xantus' Hummingbird, Baja California's Only Endemic Hummer • Birding the White Mountains in and Around Greer, Arizona • The Greater Roadrunner, New Mexico's State Bird • Where to Find Steelhead on the Lower Deschutes River in Oregon • Birding La Bajada near San Blas, Mexico • The 2008 Christmas Bird Count at Estero del Yugo in Mazatlan
View all posts by Bob →
This entry was posted in Birding the Americas, Hummingbirds and tagged feeding birds in winter, hummingbirds in winter, nature. Bookmark the permalink.