There are approximately 10,000 species of birds in the world, and any traveler interested in birds knows that you will find them in every continent and every country, with an incredible diversity from place to place no matter where you go.  Many species are endemic (unique) to a single country or smaller geographic area, while others may be widespread but still quite limited, like hummingbirds which are found throughout the western hemisphere, but only in the western hemisphere.  Like hummingbirds, woodpeckers are fascinating and unique creatures worthy of our interest and research, rather than being taken for granted.  I recently realized that of hundreds of bird articles I’ve written, exactly none have been solely about woodpeckers, which brings us to today’s subject. The best part of my writing hobby is that it’s a learning opportunity for me—I can’t put finger to keyboard until I’ve done some research, and in the process, I educate myself first.  Woodpeckers are certainly unique enough to warrant writing about them, and by researching their family I’ve discovered many intriguing facts.

Probably the most significant and unique characteristic of a woodpecker centers on its name.  Woodpeckers have large sturdy pointed bills which they unleash on trees and cactus, excavating nest cavities, probing for food and drumming their presence and territory to other birds.  Not sure who’s done the counting, but they’ve been noted to peck up to 20 times per second and up to 12,000 times in a single day.  You might wonder about woodpecker headache, but fortunately for them, evolution has kept them safe.  Their skulls are heavily reinforced, their brains are cushioned and protected and their nasal passages are screened from flying wood chips and sawdust.

They are all cavity nesters, that is they build their nests in holes they drill into trees and, in the case of the Gila and Ladder-backed Woodpeckers and Gilded Flicker, denied large diameter trees in their desert habitat, they drill holes in large saguaro cactus.  The birds are not interior decorators, lining these cavity nests usually with nothing more than wood chips, products of the drilling.  Cavities are oriented toward the warmer south and east in colder climates and to the north in warmer zones.  Another unique characteristic of woodpeckers is their tongue, which is barbed, sticky and quite long. In some species, their tongue can extend as far as 5 inches beyond the tip of the bill, which explains how woodpeckers are able to get sugar water from hummingbird feeders.  In most cases, woodpeckers also have unique feet, with two toes forward and two pointing backward (zygodactyl feet), and this together with a strong supportive tail allows them to more easily climb trees in search of food.

Arizona even has its own, the Arizona Woodpecker  (photo Bob and Prudy Bowers)

Interestingly, woodpeckers are found almost everywhere: across the Americas, in Europe, Asia and Africa.  Even more interestingly, they are not found everywhere.  Woodpeckers are not present in New Zealand, Madagascar, New Guinea or the extreme polar regions, nor, most surprisingly of all, on the giant bird-rich continent of Australia, even though they live just 600 miles north in Indonesia.  In total, there are about 180 species of woodpeckers worldwide, with 27 in Mexico and 22 in the United States.  The number one bird country in the world is Colombia, where you can find 45 species of woodpeckers.

Here in Arizona we have a respectable number of 15 species, which includes 4 sapsuckers and 2 flickers as well as 9 woodpeckers. Southeast Arizona has documented records of 9 species routinely with another 5 species rarely.  Our local regulars include the Gila and Ladder-backed Woodpeckers and Gilded Flicker.   Northern Flicker and Red-naped Sapsucker are here in winter, and occasionally we see Acorn and Lewis’s Woodpeckers.  Acorn and Arizona Woodpeckers can be found year-round in Madera Canyon, and Acorn Woodpeckers can be seen at nearby higher elevations such as Peppersauce Canyon. 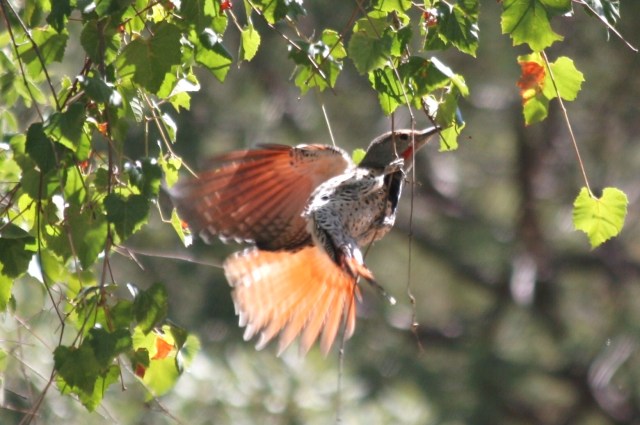 In spite of occasional hype and excitement about the Ivory-billed Woodpecker in Arkansas or Louisiana, this bird was last documented in the U.S. some 65 years ago and in Cuba in 1987, and is generally regarded as probably extinct.  Nor has a living version of Woody Woodpecker been reliably reported.

A lifelong naturalist, Bob's avocation is birding, including field observation, study, photography and writing. He spent a career in computers and consulting, but his free time has been spent outdoors backpacking, fishing and enjoying nature firsthand. Bob has traveled extensively, exploring and photographing above and underwater in Indonesia, Malaysia, Thailand, Cambodia, Egypt and throughout the United States, Canada, Mexico, the Caribbean, Central and South America. Now retired, as an amateur ornithologist Bob studies, photographs and writes primarily about birds of the Western Hemisphere. Formerly the Feature Writer for Latin America and Caribbean Travel at Suite101.com, he has been Suite101's Feature Writer for Birds and Birding since January, 2010, and has received seven Editor's Choice awards, which are listed below. Bob also writes a monthly birding column for a newspaper in Arizona, and his work appears in the travel magazine, Another Day in Paradise, published in Zihuatanejo, Mexico. His blog, Birding the 'Brooke and Beyond, discusses birding, travel and other topics in Southeast Arizona and beyond. Bob is a member of the National and Tucson Audubon Societies, Western Field Ornithologists, Arizona Field Ornithologists, the American Birding Association and other birding and conservation organizations. Bob and his wife, Prudy, live in the Santa Catalina Mountain foothills near Tucson, Arizona. To date, Bob has received Suite101 Editor's Choice awards for the following articles: • Birding by Cruise Ship in the Caribbean • The Xantus' Hummingbird, Baja California's Only Endemic Hummer • Birding the White Mountains in and Around Greer, Arizona • The Greater Roadrunner, New Mexico's State Bird • Where to Find Steelhead on the Lower Deschutes River in Oregon • Birding La Bajada near San Blas, Mexico • The 2008 Christmas Bird Count at Estero del Yugo in Mazatlan
View all posts by Bob →
This entry was posted in Birding Arizona and tagged Acorn Woodpecker, arizona woodpeckers, gila woodpecker, Northern Flicker, Red-naped Sapsucker. Bookmark the permalink.