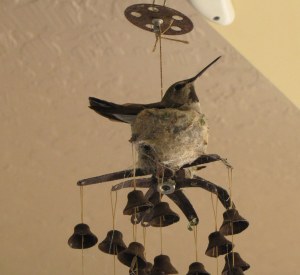 When most people think of bird nests, they picture a tea-cup-sized structure built of grass and twigs.  Many nests, in fact, do resemble grassy cups, but the full range of bird nests embraces everything from casita-sized palaces built out of firewood-sized twigs (raptors like Cooper’s Hawks and Osprey) to the bare essentials ‘nest’ of our Gambel’s Quail, usually nothing more than a patch of turf in a flower pot.  In between lie dozens of other structures, from swinging oriole baskets to woodpecker-carved cavities to the tiny nest of a Lucy’s Warbler nestled behind a fragment of mesquite bark.

As might be expected in nature, there are rational reasons for all this nesting variety.

For example, Gambel’s Quail aren’t just being lazy when they lay a clutch of eggs in your

flower pot or on your chaise lounge.  Necessarily, the chicks of ground-nesting birds are precocial, meaning they come out of their eggs wide-eyed and ready to hit the road.  And a good thing, too.  A bunch of blind, naked and helpless bird babies on the ground would not likely further the species.  As those quail babies break out of their shell, they’re on their feet following mom and dad into the world like a column of wind-up toys, and they never go back to the ‘nest’, where predators are drawn to the smell of fresh eggshells.  Building a complex nest that’s going to be abandoned on hatch day makes no sense to a quail, and rightly so. 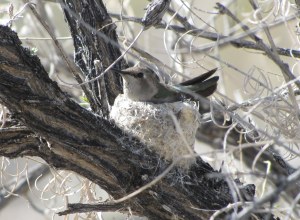 The timing of nesting plays a role in this process, as well.  Our Anna’s Hummingbirds, which have just finished nesting, build their nests during our coldest winter and spring weather.  As tiny as these nests are, they are tightly insulated with spider web, providing a temperature differential between the inside of the nest and the outside air of as much as 40 degrees.  This both protects the fragile eggs and allows the mother to conserve energy at night while incubating.  In contrast, our late spring and summer Costa’s Hummingbirds are more concerned with finding shade and cooling breezes.  Unlike our quail, most birds are altricial, meaning they are completely helpless when hatched, and must be cared for and protected, typically for two weeks or more.  Consequently, altricial bird nests usually are well-camouflaged and hidden, and as difficult for us to find as the predators that are looking for fast food.  Mourning Dove nests, on the other hand, sometimes are so poorly hidden that one wonders how so many survive.  It must be that Cooper’s Hawks prefer plump, juicy adults. 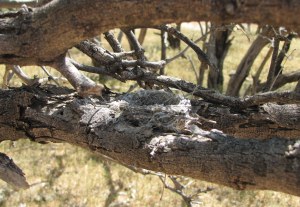 Unexpectedly, many small, vulnerable birds will nest close to and/or hang out around bird-eating raptor’s nests.   For anyone who has watched their backyard birds scatter for cover when a hawk flies by, or noticed the absence of birds near a perched hawk, this behavior seems shockingly stupid.  However, as fond of bird fare as some hawks are, normally they will not kill prey in their immediate nest area.  Cactus Wrens have even been observed nesting in the base of Red-tailed Hawk nests, pushing this leniency to the limit.  We recently found an active Cooper’s Hawk nest near SaddleBrooke that proves the point.  Within a few yards of this massive nest in a cottonwood tree, we found two nesting Anna’s Hummingbirds, a nesting Broad-billed Hummingbird, a nesting Bell’s Vireo and numerous other avian morsels, including Yellow, Yellow-rumped and Wilson’s Warblers.  What at first seemed like a collection of suicidal birds, more likely is a set of higher IQ birds.  The bravest of these might be one of the nesting Anna’s Hummingbirds.  While I was watching a baby hawk peer over the edge of the Cooper’s nest, this hummingbird mom came into my binocular view.  She hovered over the nest for a long time, checked out the newly-hatched future threat and then buzzed back to feed her own young. 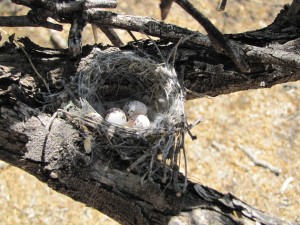 The Vermilion Flycatcher Nest from Above

A lifelong naturalist, Bob's avocation is birding, including field observation, study, photography and writing. He spent a career in computers and consulting, but his free time has been spent outdoors backpacking, fishing and enjoying nature firsthand. Bob has traveled extensively, exploring and photographing above and underwater in Indonesia, Malaysia, Thailand, Cambodia, Egypt and throughout the United States, Canada, Mexico, the Caribbean, Central and South America. Now retired, as an amateur ornithologist Bob studies, photographs and writes primarily about birds of the Western Hemisphere. Formerly the Feature Writer for Latin America and Caribbean Travel at Suite101.com, he has been Suite101's Feature Writer for Birds and Birding since January, 2010, and has received seven Editor's Choice awards, which are listed below. Bob also writes a monthly birding column for a newspaper in Arizona, and his work appears in the travel magazine, Another Day in Paradise, published in Zihuatanejo, Mexico. His blog, Birding the 'Brooke and Beyond, discusses birding, travel and other topics in Southeast Arizona and beyond. Bob is a member of the National and Tucson Audubon Societies, Western Field Ornithologists, Arizona Field Ornithologists, the American Birding Association and other birding and conservation organizations. Bob and his wife, Prudy, live in the Santa Catalina Mountain foothills near Tucson, Arizona. To date, Bob has received Suite101 Editor's Choice awards for the following articles: • Birding by Cruise Ship in the Caribbean • The Xantus' Hummingbird, Baja California's Only Endemic Hummer • Birding the White Mountains in and Around Greer, Arizona • The Greater Roadrunner, New Mexico's State Bird • Where to Find Steelhead on the Lower Deschutes River in Oregon • Birding La Bajada near San Blas, Mexico • The 2008 Christmas Bird Count at Estero del Yugo in Mazatlan
View all posts by Bob →
This entry was posted in Birding Arizona. Bookmark the permalink.