Wrens are one of my favorite bird families.  For the most part, wrens are small, fairly uncommon, active and melodious. A major exception to this set of characteristics is our state bird, the Cactus Wren, who is large by wren standards (over eight inches) and quite common in Arizona and other parts of the desert southwest. He is certainly active, but you probably wouldn’t call him melodious, since his song is described by Sibley as low, grating, chugging and unmusical, like a quacking duck or the cranking start of an antique car.  Some consider this song the quintessential sound of the desert.

Take the Cactus Wren out of the equation, though, and the other seven Arizona wrens have a lot in common.  They are all small birds with little distinctive coloration and all are accomplished songsters.  Except for the Cactus Wren, they are secretive birds that like to creep through dense, tangled vegetation, often with their tail raised above their back, a defining characteristic that should suggest a wren when you see it.  The others all are significantly smaller than the Cactus Wren, only four to six inches in length, yet they all sing disproportionately loud and beautiful songs, often to the dismay of the observer who has trouble finding the singing bird.  Worldwide, there are about 76 species in 17 genera, of which 8 species can be found in Arizona.  Four of these species are common year-round birds here, the Cactus, the Rock, the Canyon and the Bewick’s, all of which can be found in and around SaddleBrooke. 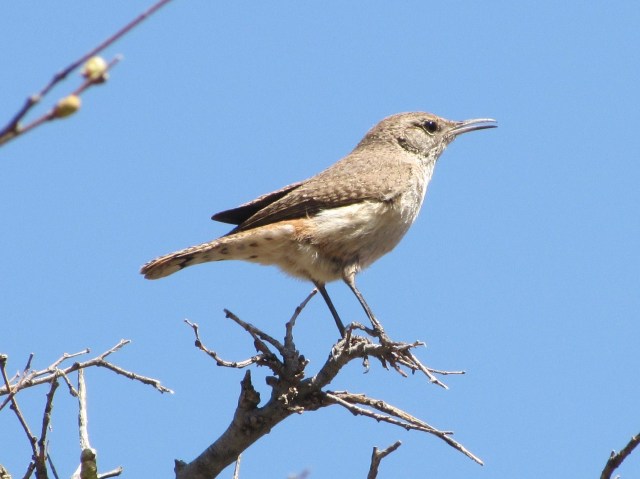 At six inches, the Rock Wren is larger than most other wrens, and as might be expected, almost always found around rocks, although it is frequently found in SaddleBrooke yards. It is easier to spot than most other wrens, as well, and in addition to often finding him in the open, he gives himself away by bouncing up and down, as if doing deep knee bends.  The song is a distinctive series of three to six ringing ‘cheer cheer cheers’. 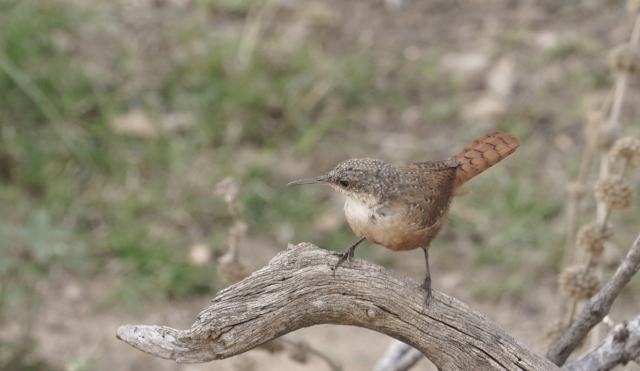 The Canyon Wren is probably my favorite wren, with an overall dark rufous color offset by a brilliant white throat and breast and an extremely long bill.  Once you’ve heard a Canyon Wren sing, you’ll never forget the song, a cascading series of clear whistles, descending and slowing, not unlike a melodious waterfall.  You can find them in SaddleBrooke across the wash in the rocky cliffs and boulders of the eastern foothills.  Our fourth year-round wren is the Bewick’s, almost as common as the Cactus Wren, and nearly as easy to find as well. It has a bold white eyebrow and a series of songs that some equate to the sound of an old rotary phone.

Our other four wrens essentially are winter visitors.  The most common of these is the House Wren, common to Arizona from September through April.  This is a small (under five inches) bird with a bubbling and loud song that suggests a larger, more easily spotted creature, but one that due to drab colors and size is sometimes difficult to find.  Winter Wrens and their split cousins the Pacific Wren are tiny birds with very limited winter sightings in Arizona, but the Marsh Wren, found in Arizona from September to March is much more likely to be found.  It’s almost exclusively found in tall reeds in wet marshes, hence the name.  Sweetwater Wetlands is a reliably good place to look for this bird, although it’s more often heard than seen.  And you probably don’t want to memorize his song to help identify him.  In the west, we’ve recorded more than 200 songs from this very prolific song writer.

This article was originally published in the Saddlebag Notes newspaper, Tucson, Arizona, on July 1, 2020.

A lifelong naturalist, Bob's avocation is birding, including field observation, study, photography and writing. He spent a career in computers and consulting, but his free time has been spent outdoors backpacking, fishing and enjoying nature firsthand. Bob has traveled extensively, exploring and photographing above and underwater in Indonesia, Malaysia, Thailand, Cambodia, Egypt and throughout the United States, Canada, Mexico, the Caribbean, Central and South America. Now retired, as an amateur ornithologist Bob studies, photographs and writes primarily about birds of the Western Hemisphere. Formerly the Feature Writer for Latin America and Caribbean Travel at Suite101.com, he has been Suite101's Feature Writer for Birds and Birding since January, 2010, and has received seven Editor's Choice awards, which are listed below. Bob also writes a monthly birding column for a newspaper in Arizona, and his work appears in the travel magazine, Another Day in Paradise, published in Zihuatanejo, Mexico. His blog, Birding the 'Brooke and Beyond, discusses birding, travel and other topics in Southeast Arizona and beyond. Bob is a member of the National and Tucson Audubon Societies, Western Field Ornithologists, Arizona Field Ornithologists, the American Birding Association and other birding and conservation organizations. Bob and his wife, Prudy, live in the Santa Catalina Mountain foothills near Tucson, Arizona. To date, Bob has received Suite101 Editor's Choice awards for the following articles: • Birding by Cruise Ship in the Caribbean • The Xantus' Hummingbird, Baja California's Only Endemic Hummer • Birding the White Mountains in and Around Greer, Arizona • The Greater Roadrunner, New Mexico's State Bird • Where to Find Steelhead on the Lower Deschutes River in Oregon • Birding La Bajada near San Blas, Mexico • The 2008 Christmas Bird Count at Estero del Yugo in Mazatlan
View all posts by Bob →
This entry was posted in Birding Arizona and tagged Arizona Wrens, bewick's wren, cactus wren, canyon wren, house wren, marsh wren, pacific wren, rock wren. Bookmark the permalink.