Fortunately for birders, the massive upheaval of a worldwide pandemic doesn’t rate as significant a problem as it might for those with more sociable pastimes.  We spend a lot of time on our own, anyway, looking for, finding and photographing birds.  We avoid crowded venues, and seek the solitude and quiet beauty of forgotten or less accessible getaways.  We do miss sharing our experiences, but we trust social distancing is not a permanent way of life.  And, as spring moves toward summer, birding brings the added pleasure of discovering newly hatched babies.  Finding new nests, nests with eggs or, better, nests with babies can do wonders for anyone depressed by the run on toilet paper. 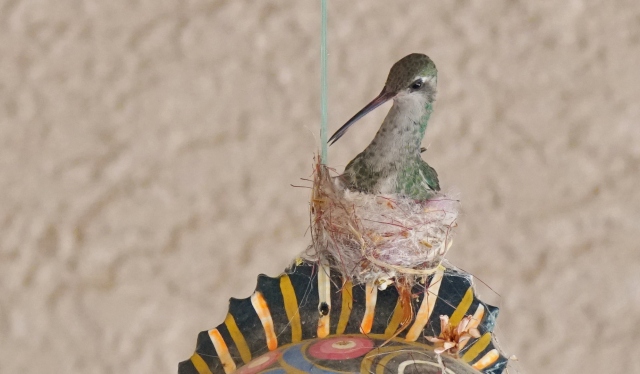 Watching a hummingbird knit her tiny cup nest into the unlikely, precarious top edge of a wind chime can be a lot more fun than spending hours with CNN.  And the questions raised by time thus spent will easily sweep away worries about how many ICU beds are available nearby.  How does any bird understand and instinctively know the how, when and where of nest building?  This is nothing taught them by their parents, and yet the nest they build for the first time looks just like the one they were hatched in.

Anna’s Hummingbirds construct miniature works of art that employ spider web, are decorated like house beautiful and look like they could weather any monsoon storm; but no predecessor teaches the first-time mother bird where to place a nest, what materials to use, how to find the components and how to make and shape the final product.  Broad-billed Hummingbirds, on the other hand, take comparable time to build and shape their nests, but their finished product always looks like a loosely thrown together conglomeration of leftovers.  And why do Hooded Orioles weave beautiful hanging basket-nests out of palm frond fiber, while tiny Verdins build large football-shaped nests with its entrance hidden near the bottom?  Seeking answers to questions like these can get you through the peak of any pandemic.

And once eggs are laid in those nests, more questions arise.  How did brood parasitism get started?  Cowbirds never build their own nests, nor do they raise their young. Like irresponsibly delinquent parents, they lay their eggs in other bird nests, often specific species, and trust the parasitized bird to ignore this intrusion, incubate and then feed the intruder birds with their own. Our Hooded Orioles have put up with this invasive behavior on the part of Bronzed Cowbirds for centuries.

Our birds are mostly altricial, as helpless as human babies, and needing full-time care and feeding until they fledge and for some time after.  Those that aren’t altricial are precocial, coming out of the egg and into the world almost totally self-sufficient.  We have one of these species to enjoy as well, our Gambel’s Quail, who lay their eggs without benefit of a nest, in flower pots, planters and on that beach towel you forgot to bring indoors.  They lay lots of eggs necessarily, since their babies are an easy appetizer for their many predators, as they follow their parents around like miniature wind-up toys.

Other bird babies are hovered over for a couple of weeks, and are easy to spot once they’ve fledged.  They aren’t particularly afraid, look a little dazed and confused and spend a lot of time quivering in place, waiting for a parent to bring them something to eat.  Parent birds are very accommodating for the most part (male hummingbirds are an exception, ignoring their many multi-mothered offspring), and will continue feeding their young with incredible patience.

And although they’re all ugly out of the shell, even fierce future predators like Great Horned Owls are teddy bear cuddly once covered with soft downy feathers.

You don’t have to be a birder to enjoy birds, and if you are lucky enough to have nesting birds in your yard, you’ll be entertained for months.  By then, maybe we’ll have a vaccine.

(This article was originally published in the Saddlebag Notes newspaper, Tucson, Arizona, on June 1, 2020)

A lifelong naturalist, Bob's avocation is birding, including field observation, study, photography and writing. He spent a career in computers and consulting, but his free time has been spent outdoors backpacking, fishing and enjoying nature firsthand. Bob has traveled extensively, exploring and photographing above and underwater in Indonesia, Malaysia, Thailand, Cambodia, Egypt and throughout the United States, Canada, Mexico, the Caribbean, Central and South America. Now retired, as an amateur ornithologist Bob studies, photographs and writes primarily about birds of the Western Hemisphere. Formerly the Feature Writer for Latin America and Caribbean Travel at Suite101.com, he has been Suite101's Feature Writer for Birds and Birding since January, 2010, and has received seven Editor's Choice awards, which are listed below. Bob also writes a monthly birding column for a newspaper in Arizona, and his work appears in the travel magazine, Another Day in Paradise, published in Zihuatanejo, Mexico. His blog, Birding the 'Brooke and Beyond, discusses birding, travel and other topics in Southeast Arizona and beyond. Bob is a member of the National and Tucson Audubon Societies, Western Field Ornithologists, Arizona Field Ornithologists, the American Birding Association and other birding and conservation organizations. Bob and his wife, Prudy, live in the Santa Catalina Mountain foothills near Tucson, Arizona. To date, Bob has received Suite101 Editor's Choice awards for the following articles: • Birding by Cruise Ship in the Caribbean • The Xantus' Hummingbird, Baja California's Only Endemic Hummer • Birding the White Mountains in and Around Greer, Arizona • The Greater Roadrunner, New Mexico's State Bird • Where to Find Steelhead on the Lower Deschutes River in Oregon • Birding La Bajada near San Blas, Mexico • The 2008 Christmas Bird Count at Estero del Yugo in Mazatlan
View all posts by Bob →
This entry was posted in Birding Arizona and tagged Baby birds, cactus wren, cowbird parasitism, great horned owl, House Finch, Hummingbirds, nature, outdoors, precocial birds. Bookmark the permalink.